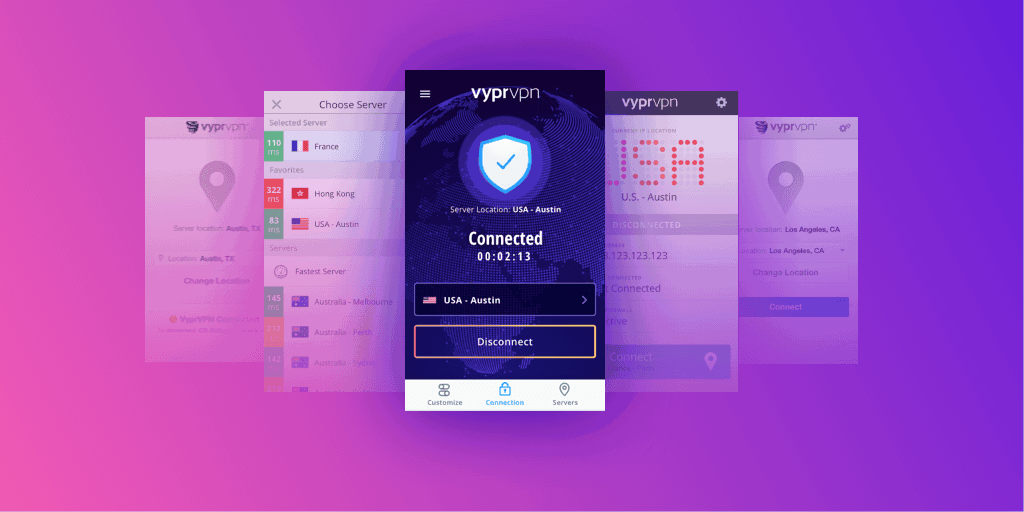 VyprVPN has been around for over 10 years now (!), and the product has changed a lot since we first introduced our VPN. We've made various improvements over the years, as well as adapted alongside a fast-evolving marketplace. We’ve gotten better at listening over the years, too, and we take user feedback very seriously. This means we incorporate suggestions quickly to continually provide enhancements to our product.

While we’ve come a long way since our inception, some things about VyprVPN haven’t changed - like our commitment to our users and core values. We’ve also upheld our strong encryption and security standards, dedication to transparency and carried on our enduring fight for the free and open internet.

As Director of Product it’s been exciting to watch VyprVPN grow, and to carve out the roadmap for our path forward. In this post I’ll share a few of the ways the product has changed over time plus offer a sneak peek into VyprVPN’s future.

In the beginning, VyprVPN offered just 1 protocol option to users – OpenVPN™. Over the years, we adapted as the internet and its users continued to evolve. In early 2014 we introduced our proprietary Chameleon™ protocol in response to strict censorship we saw being imparted by the Chinese government. Our powerful Chameleon™ protocol scrambles OpenVPN™ packet metadata to make it unrecognizable via deep packet inspection to defeat VPN-blocking, all while remaining lightweight. We recently strengthened this technology in 2021 with the introduction of Chameleon™ with Smart IP, our most advanced obfuscation technology ever. Our innovative, novel technology platform fundamentally changed how we battle governments and other censors. It works by changing the VyprVPN server IP behind the scenes periodically throughout the session without dropping the connection. It’s even more effective in evading increasingly aggressive censorship efforts we see in China and around the world.

In 2020 we continued to push the boundaries - and pushed the industry to adopt a new standard - by adding the WireGuard® protocol to our offerings. The best choice for users not located in censorship markets, WireGuard® is dubbed the VPN “protocol of the future.” We were both excited about and confident in the technology and acted fast to get it into production. In fact, we were one of the first 3 providers to do so! With exceptional speed and security, WireGuard® allows us to offer even better service to our customers whether they’re using a VPN for streaming or privacy or anything in between. If you haven’t given WireGuard® a try yet, what are you waiting for?

VyprVPN’s user interface has always been easy-to-use, and over the years we’ve updated the UI to include new branding and be even more streamlined.

In 2009 most VPNs on the market were still difficult to configure - a nuisance at very best - and thus unapproachable to a general consumer. VyprVPN was created to change this. From day 1, we strove to be the first consumer VPN that was accessible to anyone and everyone, no matter how technologically savvy (or not). We wanted to provide internet users with the tools to protect themselves online, plus control over their privacy and online experience. Achieving this goal meant prioritizing a friendly, easy-to-use user interface from the start.

Although VyprVPN looks a little different today, this goal continues to underlie our product design. While a little mystery certainly can be fun, in our case taking the mystery and challenge out of VPN use was a good thing; it allowed us to create a strong and friendly software product. We've underscored this product design with clear marketing and our strong mission over the years - even as we continued to make updates to design and UI.

In 2019 we introduced VyprVPN 3.0, which increased consistency in user experience and modernized our design. We took feedback into account and created a product aimed directly at you - our users. Most recently, we extended our app’s experience across platforms to bring unified branding to our website and account management portal. In this way, we keep it simple, easy and visually appealing, of course. Despite these changes and a drastically shifting VPN marketplace, one thing has remained constant for VyprVPN – the fact that our product is easy-to-use and approachable to everyone.

In the beginning, VyprVPN was a vocal advocate for the open internet, commonly known as net neutrality. We’ve always disagreed with throttling and other unfair ISP-led practices and built technology to empower users to avoid them.

Early on, VyprVPN was known for its ability to provide access to popular streaming platforms such as Netflix. We were proud to offer users access to an unrestricted internet – not to mention an experience free of throttling or other network manipulation performed by ISPs. These principles, known colloquially as net neutrality, or open internet, are important to us and we advocated for them avidly by taking our efforts to Washington, signing petitions and joining advocacy efforts with coalition groups.

As the years went by and the popularity of streaming platforms increased, so did the number of options available and the amount of content. This also meant the opportunity for throttling and geo-restricting increased, too. Seeing the changes in consumer behavior – as well as the behavior or streaming providers and ISPs – we also evolved. We took a methodical approach to expanding our offerings, factoring in customer feedback and requests, research and indicators on market demand. We used this information to determine which streaming libraries to support and in what priority order. We built these into our roadmap, then our technology, and rolled out support. This is the approach we continue to use today. Currently, VyprVPN supports 46+ streaming libraries. If that sounds like a big number, it’s because it is; we boast more support than most other VPNs out there.

Looking to the Future

VyprVPN has come a long way, but we certainly won’t be stopping here. We continue to solicit customer feedback and use it to inform our decisions. We've got some exciting and all-new items on our roadmap this year, including support for crypto payments and support for blockchain domains. We’re also introducing a new and simple way for users to manage their subscription plus support for additional platforms. We’re committed to changing and continually improving – all while sticking true to those same core values that have defined us as a company from day one.

Have a question about the product? Something you’d like to see us implement? Share it with us at ideas.goldenfrog.com.